The sky is the limit.

Cargo is our business. People are our passion.

From airport operations to airline station leader, aircraft fueler and ramp handler, there's a range of positions that meet a variety of interests at Rickenbacker International Airport. Read more from our team members below, then check out our current job openings through Tailored Management and Columbus Regional Airport Authority. 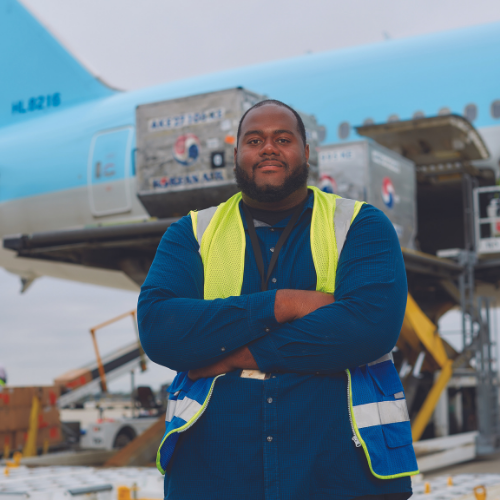 "It's important for me to model hard work to my kids." Learn more about KeAndre's role below.

On and off the clock, this hardworking team member is going places.

In addition to working at Rickenbacker International Airport, former professional basketball player KeAndre Sells holds a position with Red Cross, owns a business and is a father of three young children. He confessed that he was looking for a new adventure when he stumbled upon a job posting for Ramp Handler at Rickenbacker International. "I knew nothing about aviation, but I filled the requirements, and I liked the idea of getting a workout while working."

For him, job flexibility is one of his favorite perks at Rickenbacker International. "I'm able to pursue all of these endeavors without interference," he says. "And it's important to me to model hard work to my kids."

For KeAndre, his hard work has paid off because after three years as a Ramp Handler, he was recently promoted to Trainer. Often described as the glue that holds the team together and a servant leader with a positive attitude, KeAndre feels rewarded at Rickenbacker International. "If you put your best foot forward, they will take care of you." 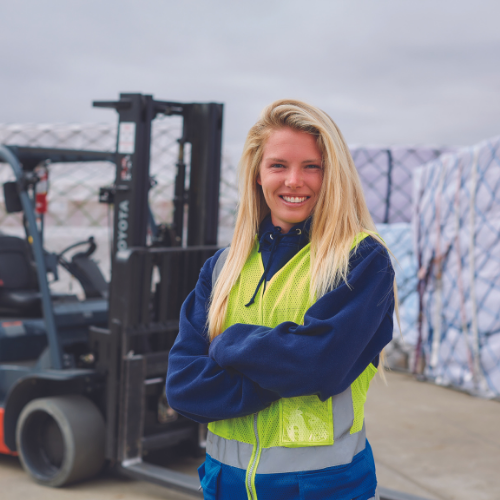 "For me, track comes first in life and working somewhere that recognizes that was important to me." Learn more about Kylie's role below.

Working the ramp enables Kylie to balance work with her Olympic training schedule.

While finishing up her junior year of college, Kylie Goldsmith was looking for a good-paying job, but she didn't want to sit at a desk. She wanted to be outdoors as much as possible and above all, the position had to flex around her training schedule as a college track athlete. During a Google search, Kylie found the Ramp Handler role and it checked all the boxes. After the interview process and background check, she hit the ground running.

"For me, track comes first in life and working somewhere that recognizes that was important to me," she shares. "The balance this job offers allows me to stay focused on my athletics." In 2024, Kylie plans on trying out for the Olympic Track & Field team for spots on the 100m and 200m races. Being a Ramp Handler also allows her the ability to stay active when she's not in the training facility.

Although she participates in an individual sport, she loves the team dynamic on the tarmac. "We're all helping each other and working towards a common goal. When I'm here, I am 100% focused." When asked what her favorite aspect of her role is, she mentioned that she likes to keep things running on time. It seems that's true for her in life, and in sport. 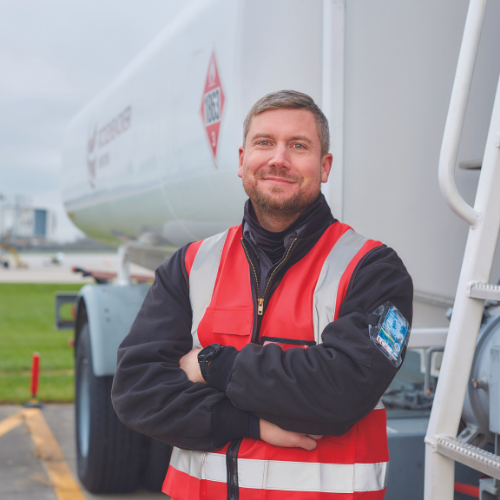 "The people here are great. All of them." Read more about Jason's role below.

Working in his comfort zone.

Jason Daly is no stranger when it comes to airplanes. In the Air Force, he specialized in Armament Systems where it was his duty to load missiles and other weaponry onto aircrafts. Once his service concluded and he transitioned into retirement, Jason was looking for something new.

“After retiring I thought I’d want nothing to do with aircraft, but I was drawn back,” he shared. He found a job posting online and applied. On his first day he knew he made the right choice to work at Rickenbacker International Airport. “The smells and sounds were all familiar to me – it was almost comforting in a way.”

As an Aircraft Fueler, Jason ensures that all the passenger and cargo planes are fueled. He also makes sure that the ground equipment and airplanes are properly serviced and maintained. Although most of his duties are familiar to him, there are some new elements that he surprisingly enjoys. “I never thought I’d like customer service, but in this case I like it,” he confesses. Jason has even forged bonds with a few regular customers, including another retired Air Force officer.

The camaraderie he shares with his teammates and passion for working hard and supporting one another are also key reasons he enjoys his job so much. “The people here are great. All of them.” 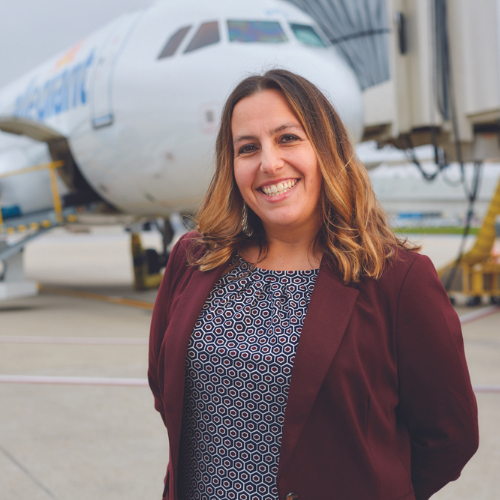 "An effort is made for most roles to be promoted from within." Read more about Deborah's role below.

A career that took off.

Once she switched to a career in the aviation industry, her professional life flourished.

After a successful career in the science and medical field, Deborah was looking for a job that would offer her flexibility once her son was born. Her husband was working at Rickenbacker International Airport in the Operations department, so she already had insight on the benefits, perks and hours. Although she had no experience in the aviation industry, she went ahead and applied. Little did she know she’d be launching a new career.

Deborah started at the ticket counter and quickly moved up the ranks to Station Leader for Allegiant Airlines at Rickenbacker International where she manages day-to-day operations. She also oversees federal regulation adherence, training and compliance with Allegiant policies, and conducts audits and meets service goals. A big part of her ability to make a smooth transition into a new industry was the training. “Allegiant has a great training program called Allegiant University,” she notes. That, combined with 1:1 training at the airport set her up for success right out of the gate.

While she loves her work and feels the impact she makes, the people are her favorite part of the job. “We’re like a big family,” she shares. “I can’t think of a single day I’ve dreaded coming to work.” If a crisis at home surfaces, she knows without a doubt a team member will cover for her. Throughout the years she’s gathered with co-workers for potlucks, game nights or book club meetings. “It’s nice to work with people I want to spend time with outside of work.”

As an integral part of the team for over seven years, Deborah has seen her co-workers achieve career success too. She’s seen cargo loaders become load masters, she’s witnessed airport police help team members transition into careers as K-9 officers, and she’s watched countless team and crew members rise up in the ranks. “An effort is made for most roles to be promoted from within,” she comments. Once you get your foot in the door at Rickenbacker International, there are countless opportunities for career growth. “The sky is literally the limit,” she laughs. 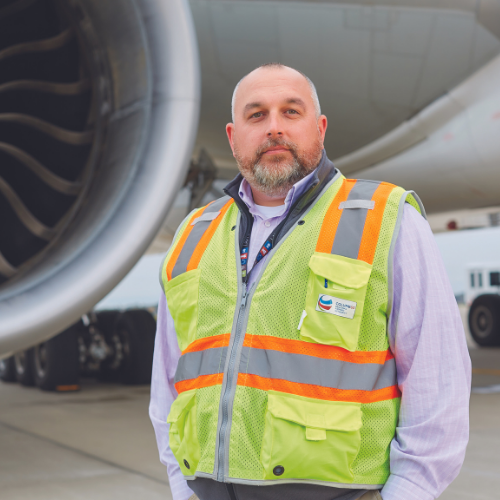 "If you could trace and follow the product we unload, you can see how it touches the community." Read more about Josh's role below.

He always knew a job in aviation was his calling, but he could have never imagined the impact it would create.

Some people find the aviation industry by chance, but for Josh Burger it was by design. Initially setting his sights on going into flight, Josh pivoted his career focus and decided to work in airport management instead. While he has a desk, you won’t find him there often. “Being on the airfield everyday is one of my favorite parts of work,” he reveals.

Josh originally started at John Glenn Columbus International Airport as an operations coordinator and has worked his way up the ranks throughout the last 20 years to his current role as Airport Operations Supervisor at Rickenbacker International Airport. His main focus is on safety and compliance, ensuring that specific Federal Aviation Administration regulations are followed. In his role, no two days are alike. One minute you might find Josh at his desk reviewing the layout of ramps and the next minute you might find him deploying teams for snow removal when flurries hit.

When asked to share his favorite part of working in aviation, he was quick to answer the people and the impact the airport has on the surrounding community. During the early stages of the pandemic, Rickenbacker International was an integral part of the local efforts in receiving and distributing PPE to the community. “When that plane arrived, it didn’t matter what your rank was. Everybody was throwing boxes,” he shares. “If you could trace and follow the product we were unloading, you can see how it touches the community.” 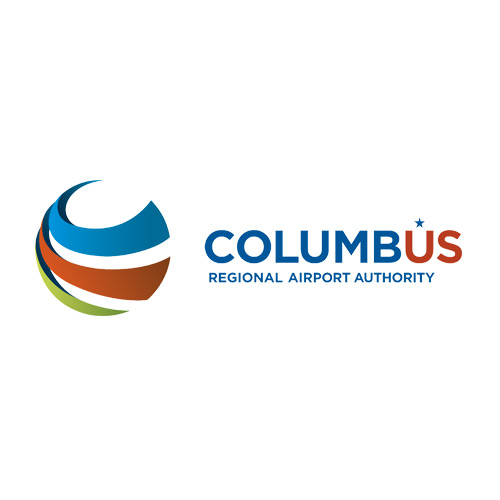